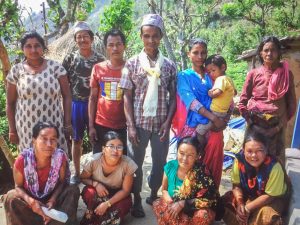 Two years on from the April 2015 earthquake in Nepal, BMS World Mission writer Hailey went to Gorkha, one of the areas worst-hit by the devastation. When she got there, a man named Krishna was waiting for her.

Krishna sits cross-legged in front of us, ready to tell us his story. His mother, Pahilee, sits down right behind him. I can see in the lines spread across her face that things have not been easy for her and her son. Neighbours begin to flood the room. The small house fills up with men, women and children. It seems like they’re here partly because of curiosity and partly because of their love for Krishna.
Two years ago, almost to this day, Krishna’s small, one-roomed house was completely destroyed when a massive earthquake, measuring 7.8 on the Richter scale, rocked his country. The roof and walls that protect me as I listen to his story are only here because of the gifts UK Christians gave to BMS’ Nepal earthquake appeal.
Hardship began for Krishna long before the earthquakes. He went blind when he was just four years old. He is now 44. “I don’t know what the world looks like,” says Krishna, tilting his head towards the floor. “I don’t remember.”
Growing up, he and his mother never had much money and barely had sufficient food to survive. “We do farming to make a living,” says Krishna. “But we never have enough for the entire year. We only make enough to last us three months.”
Krishna explains how the earthquakes made their lives even more precarious.
“Life was really hard after the earthquakes,” he says. “We had to live in the cow shed and temporary housing and it just caused more problems for us. It was really hard because my mother is getting older too.”
BMS has been helping Krishna. We’ve been working with a trusted partner on the ground in Gorkha to help the most vulnerable people in the district recover after the earthquake. Thanks to you, we are helping to rebuild homes for over a hundred people with disabilities in the area.
“Our new house is very good,” says Krishna. I’m told how it was built according to new government regulations to ensure that it is earthquake-proof. The hope is that this house will withstand any future disasters.
“We are so thankful,” says Krishna. “It feels good to live here now and we feel safe.”
Krishna lives a steep climb up a mountain in Gorkha. I’m a runner and even I find the incline leaves me straining. Out of breath. The greeting of “Namaste” and a smile are a relief when I arrive.
Krishna’s home is small and simple. It’s dark inside and there are two bed frames with no mattresses and a straw mat on the floor. That’s about it. He and his mother insist that our group sit on the bed frames while they sit on the floor. A woman comes in and places pink home-made flower necklaces and yellow scarves around each of our necks. Their kindness is humbling.
This little home, which many back in the UK or where I’m from in America wouldn’t think much of, means the world to Krishna and his mother. I can see it in the way he clutches his chest when he says, “we are very happy you helped us.”
As our Land Rover begins its descent from Krishna’s home up high in the mountains, it begins to rain. It’s like the tears welling up for Krishna and his mother. For all of the people I’ve met and spoken with today. Heaviness swells inside me and I feel like I can’t breathe.
Nilisha, my guide for the day, interrupts my thoughts from the back seat. “Hailey, look out of the window, that’s where we’re going next.” I look outside, and there it is – a beautiful rainbow cascading over our mountain to the next, right over Gorkha. I always think of God and his promises when I see rainbows, and all of a sudden I have this reassurance. Even though life is hard for these people – and it is still so hard – God is taking care of them. BMS and Christians around the world are playing our part. There is more to do. But we are still helping.
I breathe again.

BMS has given over £700,000 towards earthquake recovery in Nepal, responding to the needs of some of the worst-affected people in the aftermath of the disasters, and continuing to help the most vulnerable two years on.

This has only been possible because of your gifts and your prayers.